The Middle East Media Research Institute has many hours of Middle Eastern craziness that you can watch, and I highly recommend it as a window through which we can readily see that they are not like us—quite a difficult realization for Americans nursed on the ideals of tolerance, multiculturalism, and pacifism. However, I found the following relatively mild music video on YouTube through a link from another site—perhaps N.R.O. It is relatively mild because it does not call outright for the slaughter of Jews, unlike much children’s programming in the Arab world.

As a side note, the first little girl who prays (at 2:09) looks like my mother when she was a child. I do not know if my mother ever prayed, “O Allah, take revenge for us.” I would not put it past her, but I still doubt it.

Also, the man looks like Teddy from The Adventures of Pete and Pete. Did Theodore L. Forzman grow up to sing jihadist children’s songs? If it happened to honey tongued Cat Stevens (apostate Steven Demetre Georgiou), it could happen to anyone.

Last week, I discovered a funny site that showcases absurd vestment choices, primarily in the Anglican communion. Laugh, cry, and indulge in sectarian pride and bigotry with Bad Vestments.

Some of the vestment styles that the blogger finds egregious are not too bad, but most are horrible. In viewing them, one wonders who thought that such was a good idea. Remember that a chain of bad decisions had to have existed, from the tailor to the parish purchaser to the person wearing the vestments. However, it is not that surprising in the case of the Anglicans. If your religion has lost its collective mind, then appropriate liturgical fashion sense ought to deteriorate soon, as well.

Also, I find many Anglican “clerics” to look rather creepy. This may not be fair, but on looks alone would you trust this man with your children?

It seems as if this fellow, Mr. Duncan, is one of the decent Episcopalian leaders who wishes for his sect to remain Christian, more or less. Yet, I find the look a bit pervy. Perhaps, my Eastern bias is too strong; I prefer bishops to look like Santa Claus or wizards. For instance, compare this Anglican “bishop,”

to one of our own, the late Archbishop Micah of Yaroslavl, Who looks more like an heir to the apostles?

Getting back to Bad Vestments, you will enjoy the site, with its amazingly atrocious finds and its irreverent commentary. I particularly like this stole story:

This is an example of a good vestment idea that wasn’t brought off particularly well. The dove and the fire are perfectly fine representations of the Holy Spirit. Just don’t have the dove flying toward the fire on one side and absent in the other.

It reminds me of one of my favorite t shirt designs: 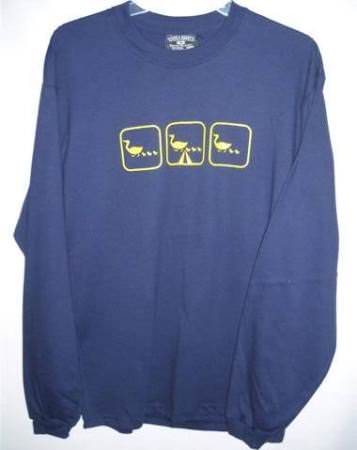 Perhaps, the E.C.U.S.A. could incorporate the design into vestments and thereby raise awareness of roadway duckling fatalities.

What else could the Episcopal “Church” U.S.A. do to make themselves more bizarre and repellent? After their rejection of Christian morality, after their communion services for dogs, and after their transformation into the religious version of the Bravo channel, what else might we expect of the spiritual descendents of Cranmer, Whitefield, and Mackonochie?

If the Anglicans had anything going for them, they had good taste and discretion. The Episcopalian sect in America has lost its good manners and mongrelized into a prayer gathering for self congratulatory leftists who think highly of their brave transgressiveness of traditional forms. Their Protestantization has become complete, and with that, the good humored, open minded, and beautiful W.A.S.P.‘s that made America have at last become ugly and ridiculous. As in an old fairy tale, there is a painful twist of justice in the story.