﻿ Arimathea | Fun | When I Grow Up | Permalink
Arimathea

When I Grow Up

I received the following funny story in an e-mail.

When asked to draw a picture of what they wanted to be when they grew up, second-grader “Sarah” turned in the lovely drawing shown below. Needless to say, the teacher was a bit surprised—Mrs. Smith had always seemed like such a conservative woman. So she sent a note home to the girl’s mother asking for clarification as to the picture’s meaning. 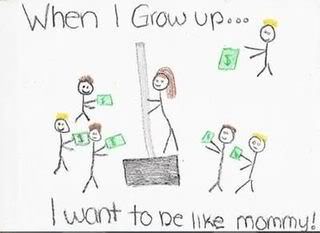 I wish to clarify that I am not now, nor have I ever been, an exotic dancer. I work at Home Depot and I told Sarah how hectic it was last week before the blizzard hit. I told her we sold out every single shovel we had. Then I found one more in the back room, and several people were fighting over who would get it.  Sarah’s picture does NOT show me dancing around a pole. It’s supposed to depict me selling the last snow shovel we had at Home Depot. From now on I will remember to check her homework more thoroughly before she turns it in.

Well, what if your mom is a pole dancer? Strippers have kids, too . . .