I received the following photograph as an e-mail forward. I tried to find the origin of the story with Snopes and Google, but I was unsuccessful in trying to discover if it was a hoax. It is widely featured on the web. I found the displayed photograph on Show-Ket’s Flickr account (Show-ket sounds like an Egyptian deity, no?): 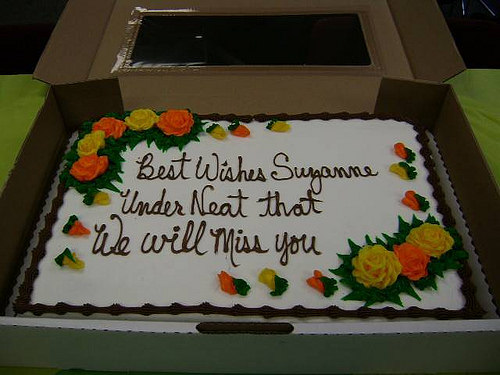 Various blog entries that comment upon the cake feature widely divergent “ebonic” caricatures—some more forthright, others rather self-censored. I think that the photograph speaks for itself. I am, nevertheless, curious as to the original posting of this picture. What was the real story? Perhaps, if we pieced together the testimony traditions throughout the blogosphere, we could reconstruct the Q source of the Wal-Mart confectionary. Was the story the result of a white supremacist fringe group angry at the oppression of multicultural politically correct censorship? Did the photograph originate in one file-sharing community but was taken up by another community who reinterpreted its significance to suit the needs of their own group narrative? Was the cake even made at Wal-Mart, or is its designation so a projected of negative value by upperclass snobs? Just think . . . we might be able to secure academic grants to pursue such research. We could even establish our own UnderNeat Seminar . . .