Hristos se naște—and a blessed synaxis of the Seventy Apostles!

Earlier this week, I posted on funny foreigners, in which I linked to Steve Sailer’s thoughts about ethnic humor. Sailer notes that we delight in recognizing patterns and in simplifying knowledge of human differences in stereotypes. I do not understand the common objections to stereotypes, as they are repeatedly substantiated—with every bus ride in D.C., every county festival in Ohio, every passing of a Starbucks in Dupont or on U Street, every shopping experience at a farmers’ market or organic grocery, every liturgy or mass,  and so on. Yet, it remains surprisingly droll when we witness the confirmation of less founded stereotypes. For instance, I recently watched the documentary Happy People: A Year in the Taiga, which focuses on the life of Siberian trappers. The main character is one such trapper—a real Russian Daniel Boone fellow who makes pretty much everything with his bare hands. During the course of the documentary, this man who lives in the freezing Russian boonies ruminates about the human condition like a Solovyov or Tolstoy on the frontier of civilization.

Speaking of Russkies and stereotype confirmation, I found the following image last month on English Russia: 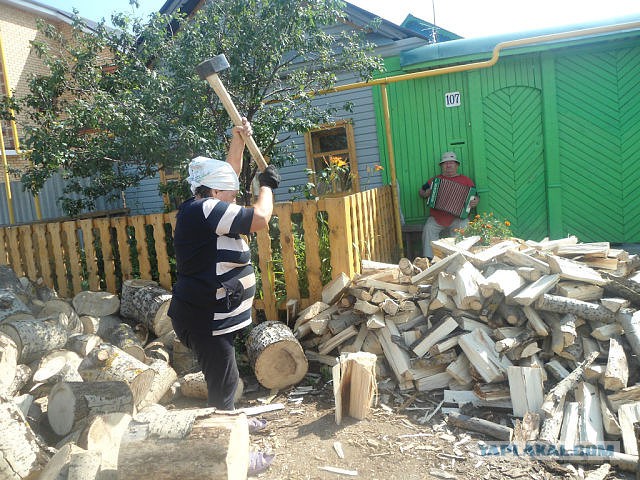 The photograph captures my experience of Russian life remarkably well. The tank-built women work like horses, while the men drink, slouch, and play. Another thing that I noticed in Russia was feline ubiquity. There are cats everywhere, from the Hermitage to convents to churches under construction. So, when I read “Two Months Underwater: The Life of a Russian Submariner” in Russia: Beyond the Headlines, I laughed when I saw the picture of the sailor with his cats on the submarine. Are vermin really a problem in the great deep? The article also recounts a humorous story about miscommunication and crow eating men in authority:

The most colorful character among my commanders was Capt. First Rank Gaponenko. Once he came down from the bridge, looked at us, and asked: “What are you guys up to?” We replied that we were practising formation maneuvers, and were about to coordinate actions with the other boat, No 685.

An even more insistent reply came: “Repeat, unable to comply, over.” Gaponenko flew right off the handle: “I am ordering you to kill your engine, right now, do you hear me? It’s Capt. First Rank Gaponenko speaking! I’ll hang you out to dry when you return to base!” Uneasy silence fell.

Then the radioman, who was half dead with fear, whispered: “Comrade Captain 1st Rank, I am sorry, it was my mistake. We need to coordinate with No 683; No 685 is an aircraft.” Gaponenko broke the communications panel in wrath, stormed out, and stayed in his quarters until we surfaced.

This coming Sunday is Theophany on the old calendar, but most Greeks currently celebrate the feast according to the new calendar. The Orthodox bless their holy water on the feast, as the Lord sanctified the River Jordan upon his baptism, which Theophany celebrates. It is common to bless nearby bodies of water, as well, and such has led to another custom for Theophany where men and/or boys dive for a cross that is thrown into the river, lake, or sea. I have written about the practice in “Happy Theophany,” “Theophany, A.D. 2010,” and “As Many As Have Been Baptized into Christ.” Well, this year when I was reading about such celebrations in Australia in “True believers take the plunge,” I found yet another amusing example of stereotype confirmation in the article’s featured image:

Seriously? At least, the cross retriever wasn’t wrestling a crocodile. The Aussie’s fit fitting the stereotype reminds me of Russian spy Anna Chapman (Kushchyenko) in leather pants and with a pistol.

as well as Ann Coulter and a logos-challenged termagant on Dr. Drew:

Let us not forget the youth in our panoply of human predictability. Last summer, I read “Drunkest D.C. Intern Ever Loses Shoe While Stalking Paul Ryan.” Sad, but not really surprising. I followed a link in the comments to DC Interns, where I found this gem:

Our “new intern” has been incredibly helpful and professional, so my story fits more into the category of laughing with him rather than laughing at him. On his first day, our “old intern” took the new intern down to the supply store to show him around.  When they got to the flag section, the old intern explained that constituents could ask to have a flag flown over the Capital for special occasions. New intern proceeds to ask, “Do they just put them in a plane all together and fly them over the Capitol once a day?” Amazing.

Patterns continue. About a year ago, a local story made the Drudge Report: “Man in court after posting Facebook photo of baby & gun.” Sad, but not really surprising. Note that Wilson Dykes is Domonic Gaines’ father. At least, he did not name his child Shitavious.

Lastly, I leave you with this wonderful stereotype confirmation involving a Jewish flash mob. I sent it to my family with the caption, “When Hebes Plot.”

Enjoy the last days of the Yuletide.