I wish my fellow Orthodox readers a blessed Holy Thursday. May the rest of Holy Week be peaceful and beneficial for you, and may your family and you rejoice in the feast of feasts on Pascha!

Fitting for the spiritual combat of Holy Week is a charming story from Russia that I read last month on RIA Novosti: “Priests to Test World’s Only Paradrop Church.” 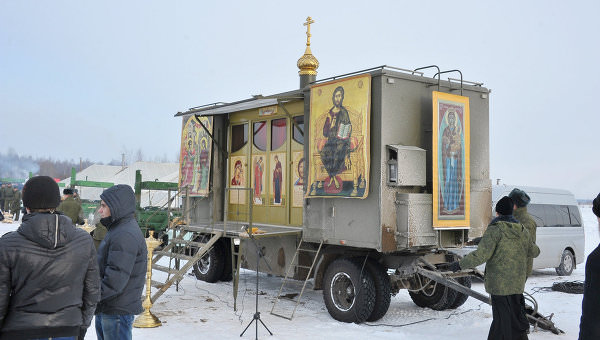 The article states that ninety percent of Russia’s Airborne Troops are Orthodox. I have read elsewhere that religious observance is much higher in the armed forces than in the society at large. I suspect that such is probably true for most nations. As Fr. Z. states with regard to his own communion, Russia is rebuilding its spiritual house brick by brick.

Weapons of Russia has additional pictures of the mobile military chapel. From the story, it appears that ten priests will undergo parachute training so that the Воздушно-десантных войск will have chaplains that air drop with their flying chapel.