﻿ Arimathea | Religion | Overcoming the Cult of the Ugly | Permalink
Arimathea

Overcoming the Cult of the Ugly

Roman Catholics in the United States have suffered greatly during the last fifty years. The implementations of the the Second Vatican Council in America took the path of what traditional papists call a “hermeneutic of discontinuity.” Instead of interpreting the council in the light of Roman tradition, many (most?) American Roman Catholics understood Vatican II as a radical reform. Caught up in the social and intellectual pathologies of the 1960’s, hierarchs, clergy, members of religious orders, and laymen enthusiastically cast off their spiritual patrimony and flirted with the gods of alien tribes. From spiritual formation to sacramental practices to morality, things changed. American Roman Catholicism became largely indistinguishable from degenerate, lukewarm American Protestantism—a wasteland of iconoclasm, rebellion against tradition, and therapeutic hedonism . . . much like the Presbyterians, but with warmer people and worse music.

One can see how the Roman Church in America mirrored the larger culture even in its architecture. Numerous parishes and cathedrals were destroyed and rebuilt according to a perverse modern anti-aesthetic. Parishioners had to wage protracted fights against zealous reforming bishops to retain their buildings as they were. Yet, the iconoclasts usually won. Not content simply to build new parishes in the form of a high school gymnasium or community auditorium, the pushers of the new style wrecked the charming structures that their ancestors had labored to construct . . . a hermeneutic and an aesthetic of discontinuity.

The Protestants in liturgical garb who fought for these changes argued that such would make the faith more relevant to modern Americans. Well, membership, mass attendance, private schooling, vocations, and the quality and product of catechism all indicate that they were quite mistaken. Ten percent of all Americans are former Roman Catholics; such shows an unprecedented hemorrhaging of the flock. According to a Pew Forum report, the overall number of Roman Catholics only continues to grow because of immigration from Latin America.

One wonders if a faithful remnant will be able to reassert traditional Roman doctrine and practice. Once the rebellious hordes leave to become Episcopalians, Unitarians, or pagans (please forgive my redundancy), the only ones left will be the pious and the strugglers who actually take their religion seriously.

One traditional Roman Catholic enclave that has grown since—and in reaction to—the general backsliding is Thomas Aquinas College in California. A Great Books college, Thomas Aquinas College maintains a classical academic program complemented by traditional Roman Catholic standards and devotions. Last month, the college consecrated its new principal chapel—Our Lady of the Most Holy Trinity. Though it is said to be in the Spanish colonial style, the chapel reminds me of the lovely Roman Catholic churches that one finds in the Alps. 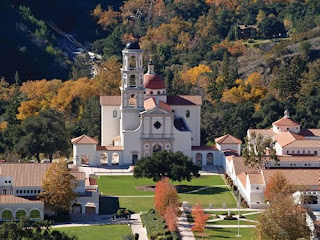 The architecture of the campus in general and of the new chapel in particular gives me hope that the Latins in this land will repent of their rebellion and reorient themselves toward the true, the good, and the beautiful, as the motto of Thomas Aquinas College encourages them—Verum, Bonum, Pulchrum.