Fr. Z. posted the following image a few weeks ago. It may be the most (darkly) amusing news blurb that I have ever seen: 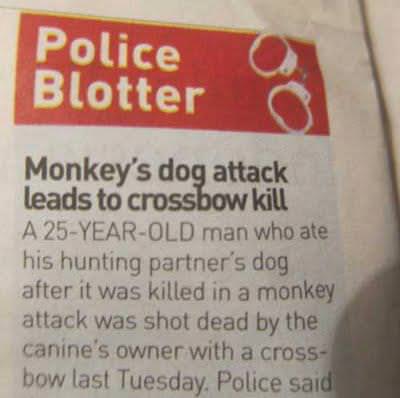 “A 25-year-old man who ate his hunting partner’s dog after it was killed in a monkey attack was shot dead by the canine’s owner with a crossbow last Tuesday. Police said the suspect and the victim were friends who were hunting together in Kratie’s Snuol district. It is understood the suspect shot his friend because he would not help save his dog from being killed in a monkey attack. The victim then took the dead dog home to eat. When the suspect saw this, he fired his crossbow at his friend killing him instantly. Police say the suspect confessed to the crime following his arrest. The monkey has not been caught.”

Scott Hollifield of McDowell News has a humorous take on the fascinating story: “Monkey? Dog? Crossbow? That’s front-page material.” We should not laugh at crime or death, but stories like this are so bizarre and morbidly funny that I cannot help myself.