On days following major feasts, the Church often celebrates people who are connected with the feast on what is called synaxes. The day after the nativity of the Theotokos, we observe the the synaxis of the holy and righteous ancestors of God, Joachim and Anna. 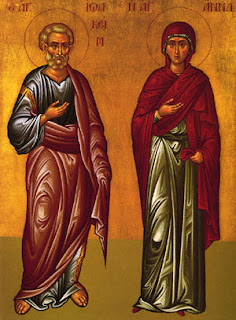 As I stated in my post on “The Nativity of the Theotokos,” Joachim and Anna are iconic grandparents for Christians. Their life is an image of their ancestors Abraham and Sarah’s story. For as Abraham and Sarah waited until old age to experience the miraculous conception, pregnancy, and birth of Isaac, thus orginating the Hebrews as a distinct lineage from Abraham, Joachim and Anna had the Mother of God in their advanced years—another miracle that announced a new birth—a new race—into the world. Yet, this time, the lineage would not be biological but spiritual—the kinship of Christ in the Christian Church.

You may wish to read more about Joachim and Anna as well as to see some more wonderful icons on the Full of Grace and Truth web site. I especially like the first icon with the young Mary standing on the tree, which I assume is the tree of Jesse.

Since you were righteous under the law of grace, O Joachim and Anna,
For our sake you gave birth to the God-given Infant.
The divine Church today therefore feasts radiantly,
Joyfully celebrating your honorable memory and giving glory to God
Who has raised up a horn of salvation
From the house of David!

Now Anna is no longer barren and nurses the All-Pure One!
She rejoices and calls us to sing a hymn of praise to Christ,
Who gave mankind the only Ever-Virgin Mother!