Today is December 6 on the Julian calendar, which is the feast of the beloved Saint Nicholas. 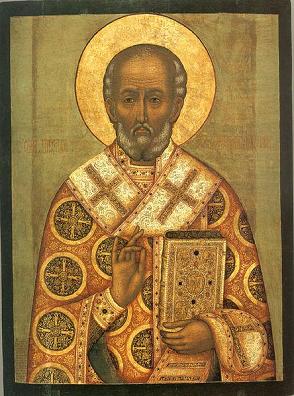 There is no shortage of information on the internet about the true Santa Claus, whose name is a linguistic corruption over time of Saint Nicholas. Read about the saint on the parish site of Oxford’s Saint Nicholas.

Saint Nicholas was the bishop of Myra, the metropolis of Lycia, in Anatolia. Myra is now Demre in Turkey. Italian sailors moved (stole) Nicholas’ relics to Bari in southeastern Italy in A.D. 1087. The Italians took advantage of the chaos that ensued from the Mohammedan hordes’ conquering that part of the empire. You can visit the Basilica of Saint Nicholas in Bari, as well as the original Church of Saint Nicholas in Myra.

An independent movie studio in Buffalo, New York named Wonderworker Studios is making a film about the saint that will come out in December, 2009—Nicholas of Myra. You can watch the trailer here:

I would like to know how the origin of Santa Claus has been forgotten. Perhaps, the film’s makers should visit an Orthodox parish on the Saint Nicholas’ feast day.

Here is a short video of icons accompanied by Greek chant:

The truth of things revealed thee to thy flock as a rule of faith,
a model of meekness, and a teacher of temperance.
Therefore thou hast won the heights by humility, riches by poverty.
Holy Father Nicholas, intercede with Christ our God that our souls may be saved.

Thou wast a faithful minister of God in Myra, O Saint Nicholas.
For having fulfilled the Gospel of Christ,
thou didst die for the people and save the innocent.
Therefore thou wast sanctified as a great initiator of the grace of God.