A New Temple in Yasenevo

I would like to wish Western Christians a beneficial Lent.

Yesterday, I came across a remarkable story about the completion of a new temple in Yasenevo near the southern edge of Moscow, evidently the neighborhood with the highest elevation in the capital. Please read the short article by Andrew Gould in the Orthodox Arts Journal, “A Miracle of Liturgical Art: The Church of the Protection of the Mother of God at Yasenevo.” The story has many gorgeous photographs (linked to larger versions if you click them). 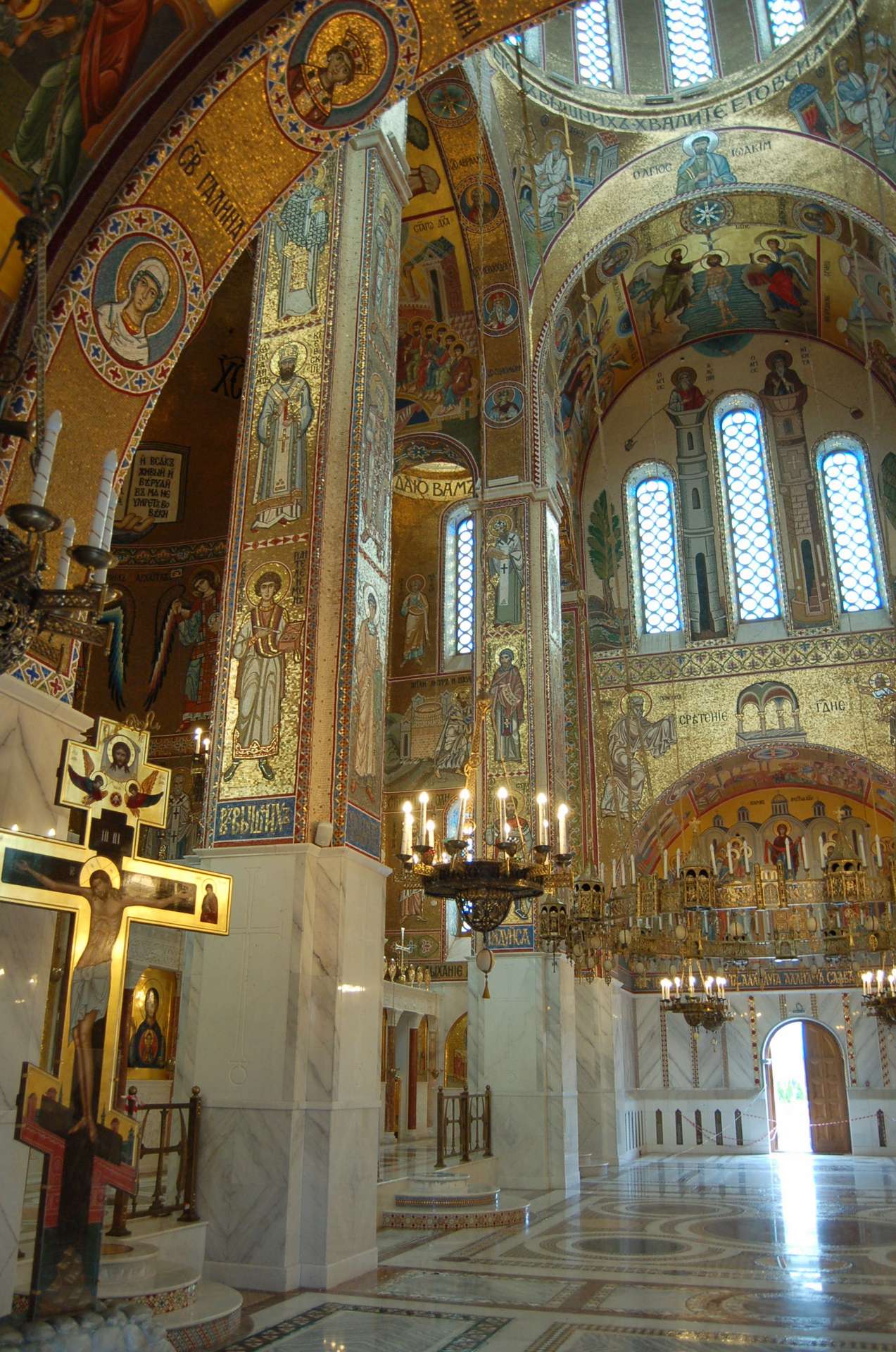 The new temple is dedicated to the Protection of the Theotokos (Храм Покрова Пресвятой Богородицы в Ясенево) due to its placement overlooking the city. The temple’s exterior foundation has commemorative crosses for Russia’s major military engagements throughout history, making it a war memorial church, which fits well with its patronal dedication to the Feast of the Protection. This naturally has endeared the new temple to servicemen throughout the country, who have contributed funds for its construction. From the article:

The true miracle of the Yasenevo church, though, lies not in its richness, but its poverty. Astonishingly, this church, constructed in just seven years, had no major individual donors. There was no great oligarch or wealthy institution footing the bill. Rather, the money came in small donations from ordinary people and pious organizations – 80,000 donors in total.

Likewise, the astonishing mosaic work was not the work of a professional studio, but of students and amateurs, all volunteers. There was one professional iconographer hired to draw the great Pantocrator, but beyond that, the work was planned by highly-capable art students. They could not afford to buy Italian tesserae for the vast areas of gold, so they asked for donations of gold jewelry from across Russia, and developed their own technique for depositing the gold onto ceramic tile fragments. The mosaic workshop was run by a retired master who taught anyone who showed up. On the day I visited, she introduced me to her crew for the day – a hairdresser, an economics student, an architect, all there on their day off from work to come lay tesserae, and doing work like skilled masters. In total there were at least 225 of these volunteer mosaicists, some of whom arrived with no skills, but only a life-long dream of making an icon, and ended up creating works of incredible beauty.

My guide, Elena, explained that almost everything was built like this – the landscaping, the marble work, the unexpected and charming decorations that could be seen virtually everywhere. I found that the construction site felt like a liturgy – the workers could feel their priestly role in this work. Everyone involved in the project recognized that a miracle was taking place – that God had ordained that this project was to be different from any other – that this church would be built only with love, and that it would outshine all others.

Glory to God! I realize that I sometimes sound repetitive, but truly consider the import of this new “people’s temple” in the heart of the former Soviet Empire—built by the normal folks out of love in order to glorify neither the revolution nor the worker but God almighty. And it is exquisitely fine! Could anyone have predicted such an accomplishment thirty years ago? Amazing!

The article notes that the temple’s crypt contains replicas of major pilgrimage shrines in the Holy Land (like the Franciscan Monastery in D.C.). I expect Muscovites unable to go to Jerusalem will visit Yasenevo on certain feast days. The following video provides some moving imagery of the edifice:

Gould includes links to a panoramic virtual tour on the temple’s web site as well as to the patriarch’s homily at the consecration. The temple page has an extensive photograph collection and additional virtual tours.

One of the article’s comments notes that the Pantocrator (ruler of all) icon of the Lord is not in its customary location in the dome but rather in the apse behind the altar. This is where we should expect the icon of the Protection—especially in a temple dedicated to the Protection. That move is curious, but the result really impresses. The virtual panorama allows you to see two of the eastern side domes, and both of them depict Christ—the northeast one is standard, but the southeast dome has a young, beardless Christ. I assume that the western side domes also depict Christ, but the virtual tour does not include them.