This sign should notify the public that airport security molesters are near: 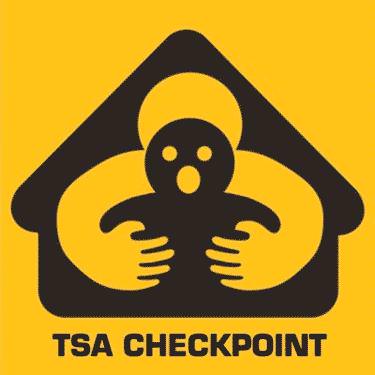 Of course, the T.S.A. folks won’t check children anymore, fearing that they will be called paedophiles. I suppose that we are still absolutely safe, as terrorists would never think of strapping explosive devices on their children. Mohammedans do not glorify child jihad, right?

T.S.A.‘s exception for children shows how dishonest and pointless the security regime is. If they wish to let little Sally Smith go without being sexually assaulted, then they should let the vast majority of Americans through unharassed. They should question everyone, with additional and more thorough questioning for foreigners, Mohammedans, people of an ethnicity historically tied to the Dar al-Islam, suspicious answering and acting people, and so on. The innocent Syrian heart surgeon who runs a practice in Bethesda and the Lebanese baker who is traveling to New York to visit relatives should pass the interview. The T.S.A. should only nude scan or frisk those people who fail to pass the previous personal interaction tests, and I would much rather have some sort of explosive triggering machine than nude scans or invasive frisking, even for the nervous and suspiciously acting twenty-two year old Egyptian engineering student who cannot communicate well in English. Pointless combustion in a box would dissuade terrorists from entering airports with body bombs.