The Loneliness of a Middle Distance Runner

I survived my Friday return from the Belle & Sebastian concert. I took the 915 commuter bus from the American Indian Museum to Columbia Mall next to the Merriweather Post Pavilion. It only cost $4.25, and a kind lady gave me the quarter when I asked if she could make change while we waited for the bus. I arrived at the gate around 6:15 PM, thinking that the opening act by Yo La Tengo would start at 6:30 PM. Unfortunately, the doors opened at 6:30 PM, and I had ninety minutes to tour the grounds. I had never before been to the Merriweather Post Pavilion, and I found it very agreeable. The place is huge with many subclimates in the various niches of the campus. For the venue, there is a wide lawn, then a large covered arena with stadium seating, and finally the floor or “pit,” which is where I was headed, having purchased my ticket within four minutes of the concert’s pre-sale opening in February. I was fortunate that my browser crashed because I originally was assigned a seat for “best seat available.” When I tried a few minutes later, the seat offered was farther from the stage, and I cursed the fates in a manner quite unworthy of Homer. Then, however, I discovered the floor option by luck or divine guidance, and I was thrilled . . . and somewhat awed that I had narrowly avoided missing out on such a wonderful opportunity. Small blessings like that seem to happen all the time. Anyway, it was a tumultuous four minutes back in the winter.

I waited in the rear section of the floor for the show to start so that I could lean against the wall above which the seats began. When Yo La Tengo commenced, the crowd was immediately into it. It was a very different environment from the Belle & Sebastian concert three years ago at Constitution Hall. Maybe the increased energy level was due to the facts that M.P.P. was an outdoor venue, that it was Friday, and that it was summer. Regardless, this crowd was ready to dance, sing, and make merry. I liked the change. Though the opening act had a large and appreciative fan base in the audience, I felt ambivalent. Georgia Hubley had a lovely, soulful voice, and some of the numbers were quite complementary to a Belle & Sebastian setting, but Ira Kaplan’s possessed antics made me uneasy. I know that musicians tap into a Dionysian flow, but it is rather revolting to witness when you do not fall under the same spell—it has an effect similar to the smell of eggs or fish for someone who is not eating them. I did find the lead’s assortment of guitars fascinating, and then I read later that I am not alone. I spent Kaplan’s orgiastic moments figuring out the pattern for the light show and people watching, and I was happy for the intermission to arrive.

When I returned to the floor for our beloved Scots to start, I placed myself close to the stage—very close. I could have been in the center had I stationed myself there at 6:30 PM, but I knew that I would not have been able to hold my ground alone given nature’s occasional requirements for me to leave the venue. Still, I was quite happy with my space—close enough to touch the side stage but away from the center so that I did not feel like I was blocking anyone’s view. Here is a snapshot by my pitiable phone camera: 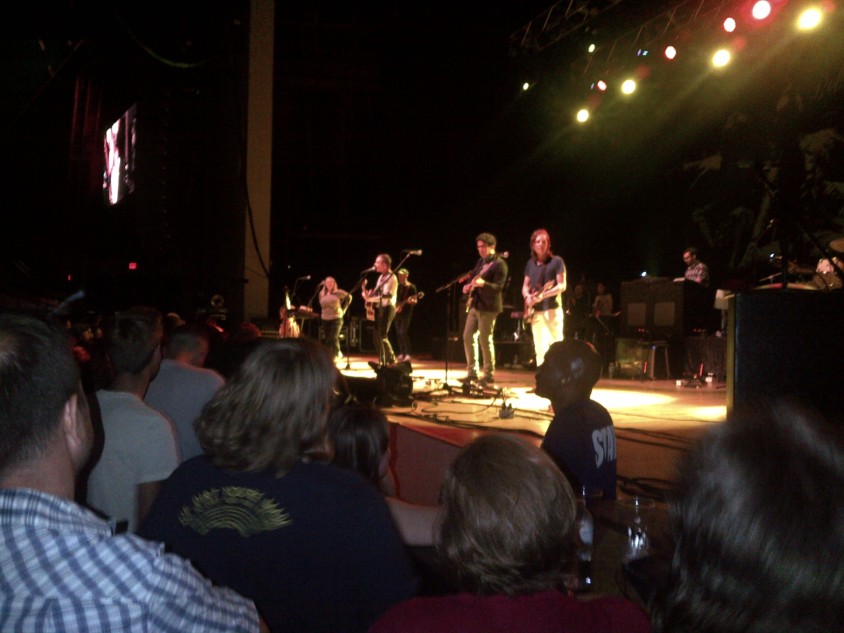 The show was excellent! Bands have good days and bad days with performances, and this was a very good day for Belle & Sebastian. They charged onto the stage and started out with the energetic yet ornerily titled instrumental “Judy Is a Dick Slap.” Murdoch, Jackson, and Martin all sang better than they did three years ago, with studio recording quality at times. In a moment of doubt during “Another Sunny Day,” I even wondered if they somehow were using pre-recordings, but they were clearly live. It was fantastic. And the members seemed happy, too. Their vacation from band life over the last few years while Murdoch had been busy with God Help the Girl has been good for them. They were enjoying being there and being together. As I mentioned, the crowd’s vibe was enthusiastic and participatory, and the crew obviously felt comfortable being so welcomed and celebrated by the audience. Indeed, it is striking to notice how the youth from Glasgow have matured into a confidant live act. See, for instance, the following rendition of “The Loneliness of a Middle Distance Runner” in what appears to be their first televised gig. I love the song, but Murdoch and Campbell come across a bit unnerved.

They are long past that. Murdoch and company now know that they are adored by their audience, and they show love in return, much to the perturbation of the security detail. It has become customary for Belle & Sebastian to invite people to dance on the stage, and such happened tonight. I resisted the urge, though I could have done so given my location. Once the stage was rather full (and I was worrying about all those wires and the potential for accidents), more folks from the floor tried to get onto the stage. Those poor bouncers, trying to maintain order and everyone’s well aligned vertebrae, while Scotland’s finest indulge in heedless pop star generosity and partyishness. After “The Boy with the Arab Strap” and “Legal Man,” the dancers shook the hands and patted the backs of the band, and even the serious Bobby Kildea was smiling brightly. It was a good time, though far too short. Two hours with B&S is just an appetizer. It makes me want to become a short term roadie just to be able to travel with them across the country.

After the show, reality reasserted itself, and I had to find a way back to D.C. I was able to share an overpriced taxi with others to the Silver Spring metro. The red line was closed between Silver Spring and New York Avenue (er, hm, “NoMa-Gallaudet”), and they were running free shuttles to New York Avenue. Once I got to “NoMa,” I just decided to walk home, wishing to save a couple bucks after shelling out my ticket’s worth in cab fare. I do not regret it, though. I listened to my Belle & Sebastian album collection for the rest of the weekend.