Belle and Sebastian at Constitution Hall

I had the great pleasure to see Belle and Sebastian last night at the D.A.R.‘s Constitution Hall. I have been looking forward to seeing the band in concert for a decade; I had not been able to see their previous tours. It was a wonderful experience. The band, the crowd, and the songs were fantastic. I was lucky to be in the fourth row, and Stuart Murdoch traveled over to my side of the stage several times. Here is an image from my less than fantastic phone camera: 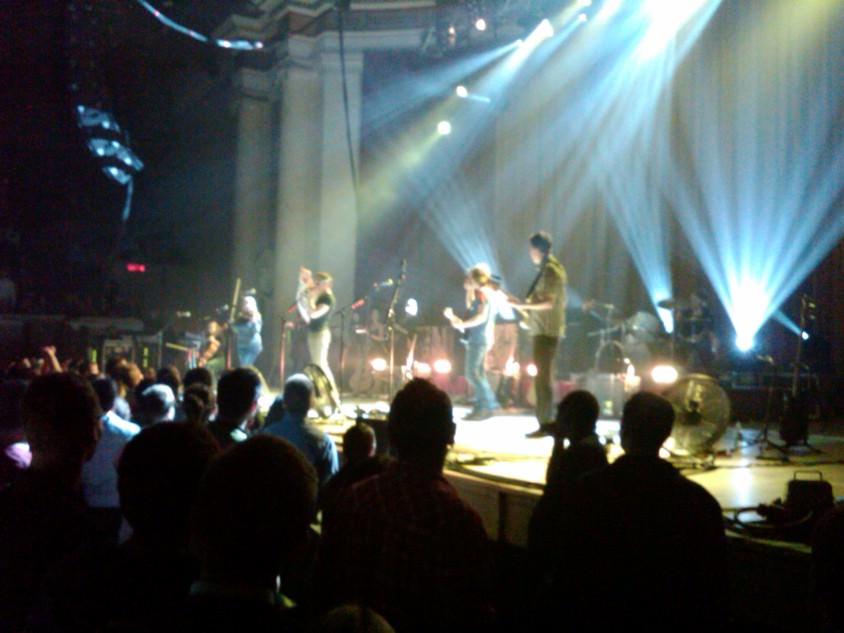 I had never been in Constitution Hall before. I found it charming. The lobby and basement lounge reminded me of a church hall. The concert hall itself was pleasant enough. I had read online that people do not typically stand at concerts there, which I found disappointing. However, as soon as Belle and Sebastian entered the hall, everyone in the orchestra seats and a good deal of the balcony folks stood. We stayed up the entire concert. It was much fun.

The opening act was Versus. I had never heard of them before, but I enjoyed most of their songs, especially their opening and closing songs. The audience was supportive but not overly enthusiastic. The male lead singer tried to encourage folks to get up, but few heeded his words. I thought at the time that it was due to the venue, given what I had read online. The crowd had no trouble getting up for Belle and Sebastian, but that was why everyone was there, of course. I think that Versus made for a suitable opening act. Maybe it has to do with the indie rock scene, but I love the lack of pretension with Belle and Sebastian, and I found Versus to have the same quality. They are just musicians who love to play and to perform. I suppose that is how most bands would be if the labels did not “streamline their product.” I admit that I like a wow-ing, high budget show. I was delighted to see U2 in concert. Yet, there is something Hollywood-esque about big name and big money bands—the production image largely hides the band. Moreover, that much money and fame must be quite burdensome on the soul. It is no wonder that so many celebrities crack and go nutty. I am not an indie rock snob, but there is something, shall I say, wholesome and intimate about such bands. With Belle and Sebastian, at least, they are very responsive to their devoted fans. If you write to them with questions, they will write you back. That is good; it must serve as a grounding for them, as well. I imagine that many major musical celebrities would like to be able to relate to their fans in such a way, too, but they have become too popular and too removed to be able to do it. It may sound silly, but I bet that they suffer from it.

Here is an early video that Campbell made for “Like Dylan in the Movies.” They look so young. Fourteen years go by quickly.

As I wrote above, the crowd was great. D.C. must have a devoted Belle and Sebastian following, and there was a good vibe connection between the musicians and the audience. Murdoch went through the crowd several times—one time walking along the edge of the balcony around the concert hall. I was truly worried that he was going to fall off and break his neck. He is married now, and his wife is too young to be a widow. He survived, though, and everyone enjoyed the spectacle. Murdoch also changed a line in “Step into My Office, Baby” from “I was burned out after Thatcher” to “I was burned out after Carter.” He also referred to the “Taxation without Representation” issue. I suppose that every group feels obligated to address the political class as if they have no other interests. I have witnessed it again and again. I suppose that outsiders just cannot see past the fact that it is the capital. Outsiders? Am I thinking like a Washingtonian? Woe be to Woden, I refuse to go native!

The band looked good. I was somewhat surprised by how much of a “cool cat” Bobby Kildea was. In addition to being his all around wonderful self, Stevie Jackson did a fabulous audience participation number with the new “I’m Not Living in the Real World.” We also got to see him bring out the harmonica. I noticed that he has also put on some weight. Mick Cooke was excellent on the trumpet and other horns; the brass really makes several of the songs. Sarah Martin played a variety of instruments, including some sort of flute-keyboard hybrid that I have never seen before. I wrote to her after the show to find out what it was. Unfortunately, Chris Geddes and Richard Colburn were tucked away in the back and I did not focus on them. I like when bands elevate the drummer a bit so that the audience can visually enjoy the percussion dance of the drummer. Perhaps, Colburn prefers to be at the same level as everyone else. Anyway, quite a spot on show!

The song line up was perfect. Admittedly, I really like about 98% of the band’s songs. So, the odds were good that I would like whatever they played. Yet, it seemed as though my personal preferences determined the program. At one point, various audience members were yelling requests, and I felt like shouting out “Dog on Wheels.” Then, Murdoch said that they were going to play one for Bo, as the band had joked earlier about wanting to visit the First Dog while they were in D.C. I started clapping, and I think that I was one of the few who got the clue—or perhaps that is my own narcissism. In addition to several songs from their new album, Write about Love, such as “I Want The World to Stop,” “I Didn’t See It Coming,” and “I’m Not Living in the Real World,” they also played “Like Dylan in the Movies,” “I’m a Cuckoo,” “I Fought in a War,” “Lord Anthony,” “Sukie in the Graveyard,” “If You find Yourself Caught in Love,” “Step into My Office, Baby,” “Simple Things,” “Piazza, New York Catcher,” “Dirty Dream Number Two,” “The Boy with the Arab Strap,” and “Sleep the Clock Around.” Of course, I could have stayed all night asking them to play other favorites, such as “Lazy Line Painter Jane,” “Le Pastie de la Bourgeoisie,” “This Is Just a Modern Rock Song,” “Jonathan David,” “The Loneliness of a Middle Distance Runner,” “I Could be Dreaming,” “Women’s Realm,” “If You’re Feeling Sinister” . . . well, the list goes on and on. Still, I was elated when they played “Judy and the Dream of Horses” during their encore. For it was “The Boy with the Arab Strap” that introduced me to the band, and it was “Judy and the Dream of Horses” that made them one of my favorite groups ever. I listened to these songs back to back from my brother’s Napster list a decade ago, and I immediately fell for those Scots. Tonight, I got to see them live. I am already looking forward to the next time, God willing.

Update: Martin answered my question (of course—they are great!): she played a Hohner Melodica.