﻿ Arimathea | Religion | A Day for Sackcloth and Ashes | Comments
Arimathea

A Day for Sackcloth and Ashes

Today on the old calendar is the commemoration of the beheading of Saint John the Forerunner (Saint John the Baptist) by Herod Antipas’ wicked men. 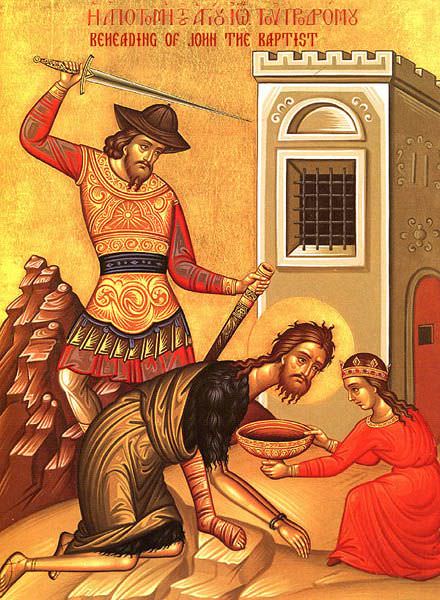 It is a fast day rather than a feast, and the somber mood fits the calendar day for Americans as we also remember the lives of those who died eight years ago in the barbarian attacks against our land. It is curious how a perverse sense of lust played a part both in John’s execution by Herod Antipas and in the suicide missions of the infidel Mohammedans.

I doubt that many non-Orthodox people know that the only religious building to be destroyed in the attacks was the small Saint Nicholas Greek Orthodox Church next to the World Trade Center, which was crushed by the falling towers. My brothers and I had visited the parish one year before the attack as we toured New York. We spent a considerable amount of time in the World Trade Center that particular day. We wanted to see the city from the top of one of the towers during the day and at night. So, we passed several hours at the top, enjoying the spectacle of New York City from its southern peak as the sun set on the West. I remember our wondering what would happen if the buildings ever collapsed. We theorized that Wall Street in its entirety would disappear, so massive were the Twin Towers. We were wrong, but we never knew what horror would occur just twelve months later.

When I have revisited the site since the attacks, I still think back to our time nine years ago. I dwell on Fritz Koenig’s Sphere. The globe shaped fountain once stood neatly in the plaza surrounded by New York’s wealth. Now, the deformed and maimed structure stands in Battery Park, a testament both to the awful destruction and to the perseverance of New Yorkers.

Yet some how, our blind leadership insists that there was no religious dimension to this act and that izlam is a religion of peace (as they repeatedly tell us). We are told that it was just 19 random men, who only incidentally came from the middle east—no significance there—and who by pure coincidence were all muzlims—again a matter of absolutely no significance whatsoever (if you are totally blind)—these fellows just met by chance one day and decided to blow up the WTC on a lark. What explanation could possibly be more plausible than that?

I hesitate to say that the US government was involved in doing this action. I do not hesitate for one moment in saying that I think they were actively involved in the cover-up. For whatever reason, they found it expedient to keep the truth from being known about what really happened on 9/11/01. The report generated by NIST is riddled with technical errors and there are countless unanswered questions and contradictions. (see http://www.ae911truth.org for technical discussion) That report is most clearly a cover-up. The US government did not want the US people to know what really happened, and they were more than happy to lie blatantly, not unlike the Obama administration, to keep us from knowing.

We have been lied to for a long time by some of the most skilled, most able liars in the business.